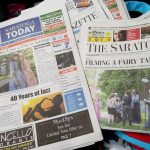 Production Underway for The Adventures of Snow White and Rose RedArticles